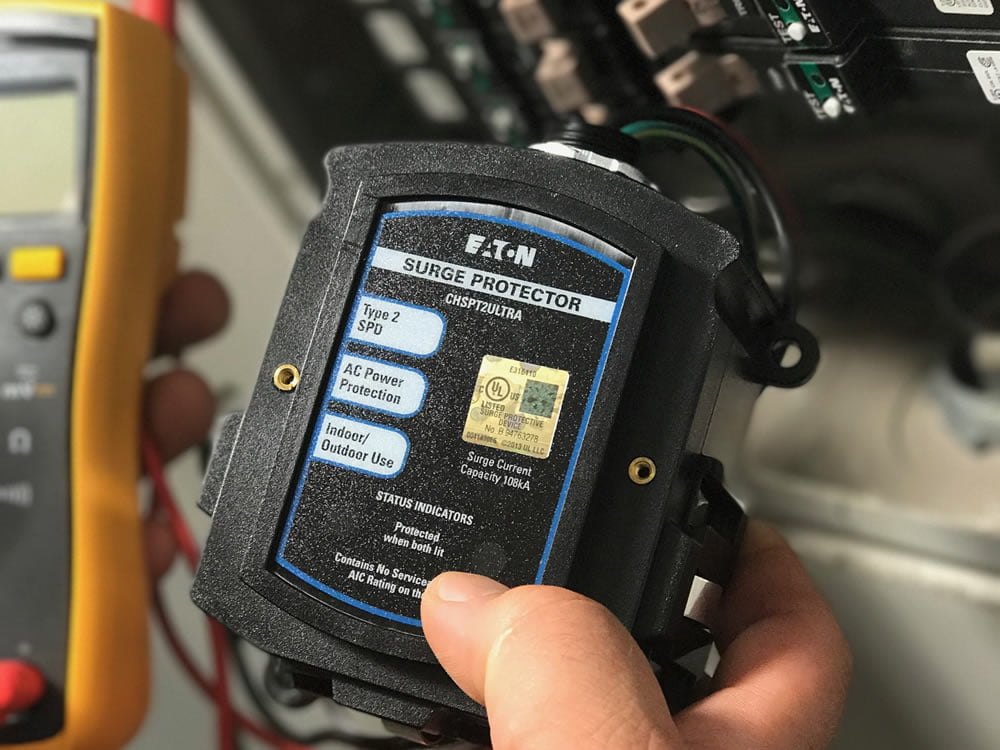 Most homeowners believe that power strips provide a high level of protection for their devices against power surges. Unfortunately, that’s far from the truth. During inclement weather conditions, a lot of homeowners wake up to find that a power surge has occurred, damaging their expensive devices and appliances and causing thousands of dollars in damage. This damage can be easily prevented by installing a whole-home surge protector which provides the highest level of protection from electrical power surges.

While many things can cause a power surge, one of the biggest causes is an electrical overload. An electrical overload can occur when too many devices and appliances are plugged into one outlet, which can draw too much power from the circuit and cause a massive increase in current. It can also be caused by overusing extension cords, or using a device/appliance with an amperage level which is above a circuit’s amperage levels. Inclement weather, especially lightning, tornadoes and blizzards can also cause a power outage.

A power surge can also be caused by faulty electrical wiring. Some of the tell-tale signs of faulty wiring is visible burn marks on the outlet, hearing a buzzing/vibrating sound from the outlet, and a burning smell coming from the outlet.

The use of large devices and appliances, such as air conditioners, washing machines and refrigerators may also cause power surges, since they use a large amount of electricity and can overload the circuit. For this reason, it is generally recommended to only plug large appliances into their own dedicated outlet.

Power surges are not uncommon, and have the potential to cause catastrophic damage to devices and appliances. Fortunately, its easy and relatively affordable to protect your home from power surges by installing a surge protector.

What is a surge protector, and how does it work?

Surge protectors, also known as surge protection devices, are designed to protect appliances and devices from power surges by either absorbing or diverting excess voltage to the ground wire when voltage levels are detected to be higher than usual. Once the voltage levels have returned to their normal operating range, access to electricity is restored to your connected devices.

Type 1 surge protectors are capable of protecting your home the most from both internal and external power surges. They are installed line side, directly on the main breaker box where electricity flows into the house from the utility provider. The provide a high level of protection because electricity cannot enter the house without flowing through the surge protector, meaning that the entire home can be protected from power surges.

Combined Type 1 and 2 surge protectors are the most common kind, and offer protection for your entire home, hence the term “whole-home surge protector”.

Are you interested in installing a whole-home surge protector?

Contact MADE ELECTRIC today! We are a trusted electrical contractor that operates in Toronto and the GTA, with a professional and fully licensed team. We’re happy to guide you through the entire installation process, from planning to implementation.