In today’s modern world, we have more electronics in the home than ever before — that’s thousands of dollars worth of electronic devices, including home appliances like refrigerators, ovens, and furnaces. Power surges (which occur daily) carry the risk of ruining these devices, as surges can be enough to damage the highly-sensitive circuitry and fry your devices completely. In worst case scenarios, they can also cause house fires when they carry thousands of volts. This is why whole house surge protection is an especially important investment for homeowners.

The majority of indoor surges are caused by everyday use of household equipment. When larger appliances (such as washing machines, refrigerators, pumps, and HVAC systems) switch on, high amounts of amperage are drawn. This happens often throughout the day, as high-power appliances constantly cycle on and off, causing frequent voltage spikes. The effect of these low-level surges is that the circuitry is degraded, wearing down expensive electronics that may result in the need for costly replacements.

With the amount of electronics in today’s home, there is also a higher demand of electricity, increasing the likelihood of rolling blackouts in intense weather conditions, such as rain and snow storms. The more energy-sucking devices there are in a home, the heavier the load of electrical demand. The population’s growing reliance on technology has definitely been shown to have taken a significant toll on the electrical grid, affecting on one end the internal wiring of homes.

Most homeowners know to protect their electronics with plug-in power strips, but not all of them have surge protection. Without surge protection, thousands of dollars in loss can accumulate over time, as the damage inflicted may not be immediately noticeable. The plug-ins that do have surge protection usually only protect the devices plugged into it, but are also important to have in the home in addition to whole house surge protection. When buying plug-ins, check the packaging to see that it has been rated by the Underwriters Laboratories, indicated by familiar ‘UL’ symbol. Licensed electricians will also be able to give recommendations on the most effective products on the market.

For complete security, homeowner’s should balance individual protection and whole house protection. Having a licensed electrician install whole house surge protection device will ensure that if there is ever a surge, the device will stop it from entering the internal wiring of your home, effectively guarding it from what could be catastrophic damage.

Whole house surge protectors can have different features, such as lights or alarms indicating when a device has protected against a large surge. Devices should be rated to protect between 20,000-40,000 amps of voltage (ideally 40,000 amps of a surge at minimum). Lights can also indicate when the device’s time is up and when it needs to be replaced.

Contact MADE ELECTRIC for more information, to learn more about essential surge protection, and to inquire about having a whole house surge protector installed in your home! 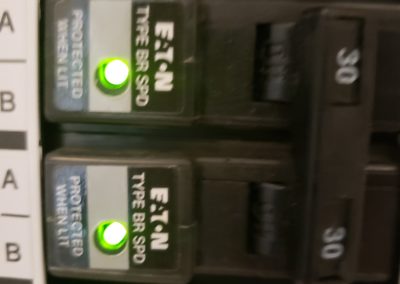 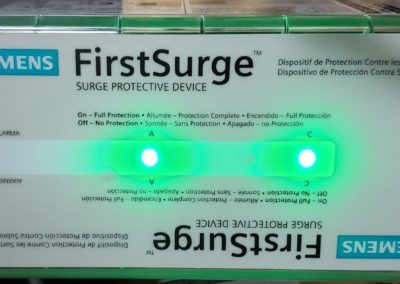 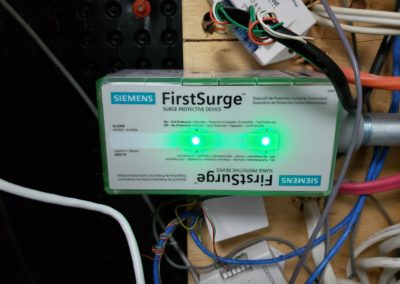 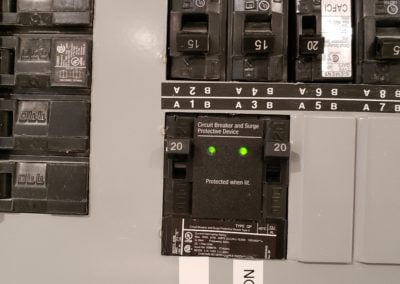 How do I know if my house already has whole house surge protection?

Whole house surge protection devices are usually mounted to the side of a home’s electrical panel. As it is designed to constantly monitor the electricity coming into a home, devices can wear out their time, and will show if your home is no longer being protected when the LED lights have shut off. If you find that the LED light is no longer on, it may be time to call an electrician to replace it. Installation should be done by a licensed professional who has the experience of working with the electrical panel, the wiring, and the circuit breaker.

Is surge protection really worth the investment?

Investing in proper surge protection is definitely a wise decision for homeowners, as it is one of the very necessary steps in property protection. Over time, surge protection can save homeowners thousands of dollars as it guards against accidents caused by unpredictable weather conditions, protecting electronics that are normally vulnerable to electrical surges.

What other features of plug-in surge protectors should I look for?

Plug-ins should have switches for each outlet, as well as indicator lights to show if a unit is on or still working. Homeowners should caution against plugging too many electronic devices into the same the power strip, especially if the devices are all sensitive to surges. Since low-power surges are created by the devices themselves, the connected devices sharing the strip can be affected. After whole house surge protection is installed, MADE ELECTRIC electricians can make recommendations on the most effective products on the market.